Hence, I decided to look elsewhere in the heavens and see what names other languages had given to the remaining seven planets in orbit around our sun. Below is the language, its name and, where possible, the translation. Many nations simply use the same name, albeit with the phonetic spelling reflecting local pronunciation. As these clearly come from the same source as the English names, I have concentrated on the alternatives, and we start with the planet Mercury. Arabic - Otaared - is the same deity as Mercury, the messenger.
Aztec - Payinalcitlal - research failed to trace any details on where this name originated.
Babylonian - Nabu - the ancient Mesopotamian god of literacy, the rational arts, scribes and wisdom.
Bengali - Budha - is a Hindu deity
Cantonese - Suising - again, no further information.
Farsi - Tir - is the Persian word for 'arrow'.
Greek - Hermes - is the Greek version of Mercury and, once again, the messenger
Hebrew - kochav chama - sun star
Hawaii - Ukaliali'i - is a translation of 'mercury', the metal.
Japan - Suisei - again the translation of 'mercury' the metal.
Kazakhstan - Bolpan - no amount of research revealed where the name comes from.
Korea - Soosung - 'star of water'
Malayalam - Utarid - is the translation of 'mercury'.
Mandarin Chinese - Shuixing - the water planet
Maori - Aparangi - is also a girls name.
Mongolia - budha - again, this is a Hindu deity.
Nahuatl - Payinalcitlal - again, no further information.
Old Czech - Dobropan - is another translation of 'mercury'
Sanskrit - Budha - is a Hindu deity also known as Soumya or 'son of Moon', Rauhineya, and Tunga.
Sumerian - Nabu - a deity, the god of wisdom and writing (known as the Saviour, the Redeemer)
Swahili - Zaibaki - which translates as 'the rest', although this surely has no relevance in this context.
Tahitian - Ta'ero - translates as 'drug', another which hardly seems appropriate.
Uzbek - Utorid - is the same as the Arabic name, but with the Uzbek phonetic pronunciation. 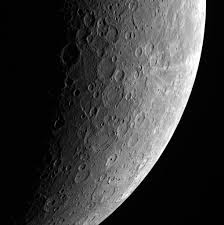 Note the spellings and characters used are English, so don't write to me pointing missing umlauts, accents, etc. or how I should have used a different alphabet.
Posted by Anthony1956 at 09:44