Sometimes when researching I come across a piece which is possibly not intended to be amusing, but I found it so (possibly because of her surname) and for that reason I shall share it. This comes from the Birmingham Daily Post dated 7th November 1894.

Mr. Wynne E. Baxter held an enquiry in London, yesterday, respecting the death of Emma Kipper, aged fifty-eight, the wife of a carpenter. On the 10th of last month deceased crossed her room, when she trod on the tail of her cat, which turned round and bit her on the back of the leg. She said she felt the teeth go right to the bone. She became very ill, and was removed to the hospital, when it was found that there were wounds on the back of the left foot and a portion of the leg was gangrenous. The cause of death was infective spreading gangrene, the origin of which was possibly the bite of the cat. The jury returned a verdict of "Accidental death through the bite of a cat." 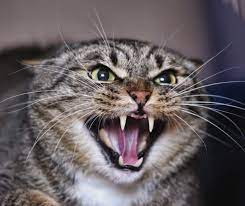