As last time, when researching I do sometimes come across a piece which is possibly not intended to be amusing, but I found it so and for that reason I shall share it. This comes from the Birmingham Daily Post dated 7th November 1894.

The Essex coroner held an inquest on Monday night on the body of Mr James Cornwell, of Castle Hedingham, who was found with a gunshot wound in his head, lying in a ditch in the neighbourhood, on Saturday. Mr Cornwell left his home on Friday night to go to a neighbouring village. He had with him his gun, and was accompanied by a collie dog. As he did not return in the evening a search was made for him, and on the following day his lifeless body was found in a ditch near Long Crofts. The left barrel of the gun had been discharged, and there was a bramble between the triggers. The face was shattered by a gunshot. The collie was found watching by the side of its master, and refused to allow the body to be touched until Mrs Cornwell arrived. The jury returned a verdict of "Accidental death", 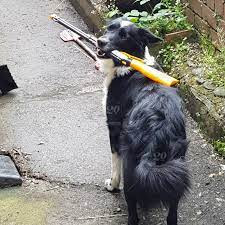 I have to say the actions of the dog after the body was found did make me wonder whether it had planted the evidence of the bramble, and refused to let anyone approach until it was sure the man was dead. But then if dogs were really that smart, owners would simply tell them to 'shit in this bag'.

Some may realise this is the same date as that of the killer cat story last time. It did make me wonder of if the editor of the Birmingham Daily Post had collected such tales (not tails) for a slow news week.
Posted by Anthony1956 at 10:28