A Walk Around the Former Local Mines (in Staffordshire and Warwickshire)

As part of the research for a forthcoming book, I recently walked a route looking at some of the industrial heritage between Tamworth and Atherstone. This is a long circular walk but could easily be made shorter or turned into a linear walk by using the canal or railway to begin at Atherstone. I shall start at any point on the Coventry Canal from Fazeley Junction to Amington Green and head east towards Coventry, aided by Ordnance Survey Map 220.
No matter where you begin note when you cross under bridge 63 and the signs for Hodge Lane Nature Reserve, for we will catch up with this later. Other than the canal itself, the first sign of coal comes at Alvecote, with its marina and the Samuel Barlow pub, named after a haulier who will have moved tons of coal. Pass under Robeys Lane and opposite the ruins of Alvecote Priory, to the left is the Alvecote Pools beyond the railway, created when the ground subsided post-mining and subsequently flooded. This is part of Pooley Hall Nature Reserve, also known as Canal Pool. Note the adjacent spoil heap offers excellent views if you wish to climb it.
Soon you will hear the M42 and as we approach the canal narrows – here the railway once crossed the canal, the arch on the opposite side from the tow path is modern strengthening but on the towpath side the brickwork of the bridge support is typical railway architecture. Beyond note there is a marker post, it has a blue arrow and indicates we are walking the Miner’s Way. Just before where the M42 crosses is bridge 56, leading to Pooley Country Park, take this bridge and follow the metalled road – noting the images steniclled on the support of the motorway bridge. When you see the parking for disabled signposted, take a slight detour and take in the visitor centre and the former winding wheel for Pooley Hall.
Continue and alongside a straight stretch, note the war memorial erected by the colliery to those who fell in the Great War who had previously worked the mine. There are good views across to the left of the canal and countryside. At the bottom of this path is the B5000, turn left, cross the canal bridge, then at the crossroads go straight on and cross the canal again along Grendon Road. Ignore Common Road and take the second right, St Helena Road. Just past Rowena Gardens there is a field gate on the left, here a stone marks the site of the Little Jim’s Cottage miners’ cottage. Look on the right and the first of three stiles heading off to the right where it takes you to a gate, almost invisible until quite near. Turn left here, then at the top at Hollies Cottage, take the path to the right around the cottage, through a kissing gate, and then up a well-trodden grassy path to the top corner of the field and another kissing gate. Walk through, turn left, and take the left path across the stile. 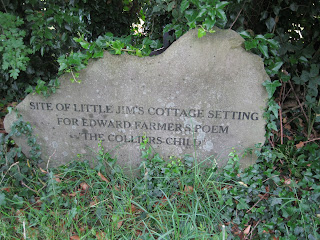 Keep the hedge on your right and walk on until reaching the metal gate, and stile. Cross the road, the meeting of Dunns Lane and Church Road, and follow the footpath waymarked straight ahead through the small wood. Here another stile points us straight ahead, this field passes between the site of the former pit to the right, beyond the woodland, and on the left is the remains of a spoil heap. Follow the hedgerow to a gap, then take a short detour through this gate to see said spoil heap not yet reclaimed by nature. Come back through the gate and turn left and head for the corner of the field. Across the stile and take the drive on the right. This brings you to the A5 Watling Street.
Here head downhill along the bust A5, crossing after the island until reaching the houses lying back from the road on the right. Turn in and find Waste Lane, which we follow south along here along a broad and well-made track. After a while reach Folly Lane and turn right. The aptly-named Waste Hill is to the right and in a while you reach the summit of this road where you will find a metal gate on the left. Pause and look across to see Merevale Hall on the top of the hill in the distance. Shortly we reach the junction with The Common, turn right along this road using the footpath on the opposite side as we skirt Baddesley Common. Eventually reaching Baddesley, take the third road on the left which is New Street, note the monument in the form of the winding wheel dedicated to the miners on the corner. 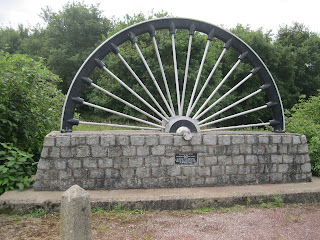 Walk down New Street until just before the end where it turn sharply left there is a footpath waymarked to the right, follow this gravel path to Watery Lane at the bottom where we turn right. Follow this until we reach the first waymarked path on the left. Through the kissing gate and head to the right across the field to the gap in the hedge ahead. Continue on and come to a crossing over a brook. Cross here and turn left. Pause to see the major railway viaduct above, we will be following the path of the disused railway for a while. Pass under the viaduct and straight ahead to a gate. Go through the gate and turn right. Now keep the hedgerow on the right to parallel the former railway. Occasionally there is the opportunity to pop in to see and even walk the former track bed, but don’t follow it too far as it does not give access to the rest of the walk, although once it did take coal away from the mines here. 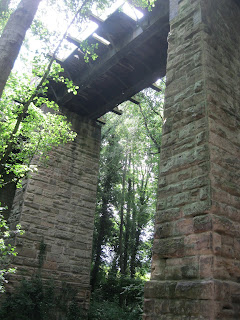 Keep going until you have seen the embankment become a cutting and shortly there is a waymarker pointing diagonally across the latter part of the field to a stile. Cross the stile and turn right keeping the hedge on the right and soon come to a gap in the hedge and another stile. Emerge on the road and turn left, take the second footpath on the right and follow the markers taking you around the field keeping the hedgerow on your right. At the far corner is a kissing gate, go through and skirt the single property there by a narrow path. Follow this and along the drive away from the house come to another gate. Go through and keep the woodland on your left and walk between it and the fence until reaching a plank bridge which we cross and come to a kissing gate opposite, go through and at cross the field to the gap where two footpaths form a crossroads, turn right here. Ahead is a kissing gate and you can see further evidence of the dismantled railway to the right as we near. Ascend the steps and then turn left and quickly right across the remains of the disused railway. Now we see a tunnel (albeit effectively a large pipe) which we will go through to emerge between two green fences. On the right is the freight terminal, on the left the railway lines still run with rolling stock here. At the end the path funnels and takes us down to another tunnel, emerging and turning left along the gravel path where the spoil heap is visible to the left. As the path runs out, take the gate on the right and cross the railway track. Turn immediately right and then left when this track terminates at the gate. Soon we come to the modern industrial estate with roads named after former collieries. Cross over and turn left. Follow this through three traffic islands to emerge at Watling Street via Danny Morson Way. Cross at the pedestrian crossing and turn right. Opposite a large old building is an ungated gap which we follow.
Along this track to the top of the rise and turn right through a narrow pathway and eventually come out on Green Lane and a dog leg to the right on to Cockspur Street, turn left at the junction and after the junction of the left, Cockspur Street becomes Hermitage Lane as you leave Birchmoor. At the end of Hermitage Lane we reach the B5000 again. Turn left and we can now choose between Robeys Lane on the right, this a metalled road with no pathway and nothing of interest until we reach the ruins of the priory and the marina again, when we can follow the canal back west to our chosen starting point. Perhaps of more interest would be to continue and turn right at the second traffic island. This is Mercian Way and passes an industrial estate and new housing until, after another two traffic islands, a grassy area to the right heralds the start of Hodge Lane Nature Reserve which we can follow through to the canal and then back west to our chosen starting point on the Coventry Canal.
Altogether this is a walk of more than ten miles (depending upon the starting point). No great climbs but gently rolling landscape with an excellent mix of former industry and modern countryside. As stated at the beginning there is ample opportunity to cut the route short at several points.
Posted by Anthony1956 at 05:27